I like you, do you like me? My friend Grant asked me this question on the first day of class in 2 grade. Both dressed in I-Zod polo’s and Levi jeans, this was how we made friends. Direct. No punches, and standing right in front of each other.

Now fast-forward 25 years. How do kids find out if someone like’s them today? By asking them to be friends over Facebook? Following them on Instagram? Watching their vine videos? I’m not even sure if verbal exchange even takes place!

me in 2nd grade. Oh how I miss my thick head of hair 🙂

At several speaking engagements, I’ve had audience comments on the difference in expressing emotions online versus in person. One person commented on how they have a fantastic virtual relationship with their 14-year old cousin. They’re online exchanges are witty, thoughtful, and frequent. They obviously like each other. However, they recently had a chance to spend some quality time together. There physical exchange was vastly different. It was non-verbal as if they’ve never met. You could hear a pin drop. They had nothing to say to each other! Why did this 14-year-old fail to exhibit the same social skills in-person? I thought they ‘liked’ each other? It’s obvious that some of us express ourselves differently online then we do in the physical world. Sometimes our intent can get lost in the digital landscape.

My wife is full of love and expresses it often and for that I’m very grateful. We both share the love language of ‘words of affirmation.’ Lately, I’ve been more observant of the difference between expressing love through face-to-face communication versus written love. Particularly, through a digital medium like social media.

For example, early this year I came home from a hard day at work. She was on couch working on her laptop. We exchanged a disconnected greeting as I walked into the kitchen. After a few minutes of silence, I felt myself becoming frustrated. Why hasn’t she asked me how my day was? Can’t she feel that I need her attention right now? As my frustration began to mount, I began rehearsing what I was going to say once she finally came into the kitchen. Before I could put my foot in my mouth, she popped off the couch, stretched her beautiful body out tall and said “Hi lovies, I just posted the cutest picture of you and the animals online” – Don’t get me wrong, attention is what makes the world go round. And digital love can make you feel good.

I decided not to have a temper tantrum and replied with a passive, “Thanks honey! I’m heading outside to play with the dogs.” The truth was, I was upset. Why did she feel digitally obligated to express her love for me online instead of in-person? Here is the pic she posted:

(Look at all of those loving hash tags. And 54 likes with 10 comments! Holy LIKE!) 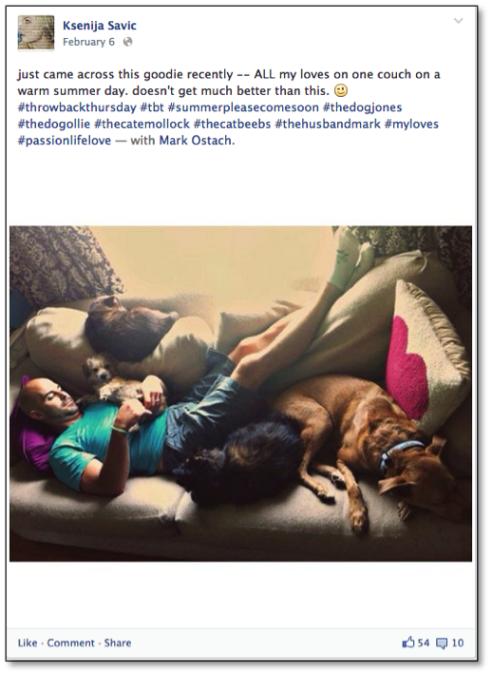 Look at all of those loving hash tags. And 54 likes with 10 comments! Holy LIKE!   These are just a few examples of how we are shifting the way we express ourselves online versus face to face. Our digital expression can reach far more people. We can mold the exact word selection. The perfect picture. Showcase our edited life to the masses. However, this digital expression is counter-productive and is fostering feelings of loneliness.

We are warm-blooded people who need connection and crave attention. Expressing this through a cold-blooded medium is crippling our true connections with the people we love.

The next time you are looking to express how you feel about someone, I suggest you try the following:

Look into their eyes and smile.

This will do more for you both emotionally & physically than any ‘like’ on the internet could ever do.

If you enjoyed this, check out some of the other posts.