Every time I would talk with my father-in-law, he would always speak the same 5 words before we finished our time together: Kiss the kids for me.

As he approached the final days of his life last week, those words were uttered each time we visited him. My words below are a dedication to the man that I’m proud to have called my Father.

I’ve learned so much from Victor Savic. He’s modeled the way for me in many ways. A father first, he spent his entire life devoted to providing for his two daughters and wife. He worked tirelessly at various jobs in the food science and baking industry. Like a loaf of bread rising in the oven, he met each morning with a smile and positive attitude that lifted up everyone around him. 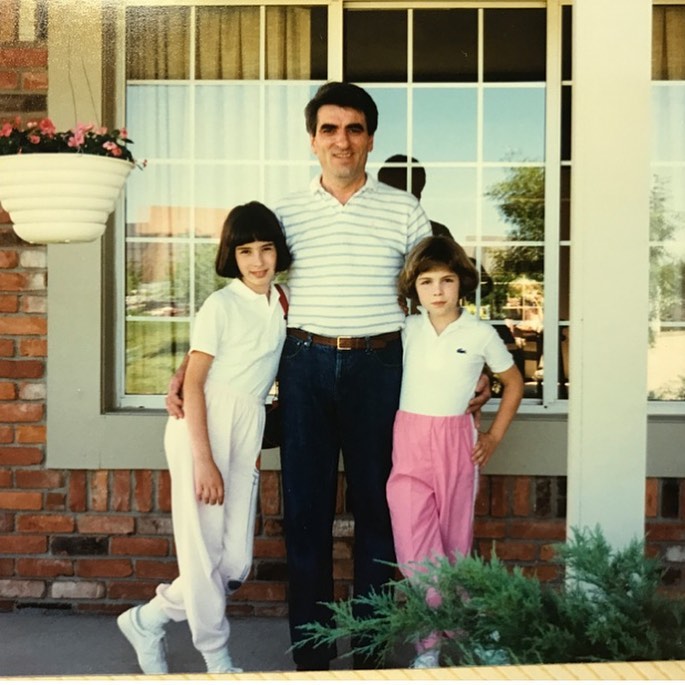 Life In The “Old Country”

Born in a small village of the former Yugoslavia, Victor learned first hand what it meant to live off of the land. He came from nothing. He told me once that his family would sleep in the fields a mile from the village so they could begin harvesting right when they woke up as opposed to wasting time getting ready at home. His first job was to ‘watch the cows’ when he was 10 years old. He once dug a football field worth of land 3 feet deep in preparation for a vineyard. He dug it in a single summer all by himself.  Odd jobs aside, he used these experiences as building blocks to climb his way out of the life he knew. He was the first person in his entire village to go to college in the US. I can only imagine the amount of courage it must have taken him to pave this pathway.

We built our friendship out of spending good old fashion time together. Before our kids were born, I used to go visit him on Saturday mornings with coffee & bagels. He would slide on his black rubber sandals, grab his cigarettes from the garage, and head out to go sit on the back porch patio. I would follow behind him after hitting play on the 6-Disc CD player that was packed with Serbian music. Although I never understood the lyrics, it brought me closer to him and the beautiful culture that he and my mother-in-law came from. The morning sun would shine down as we both enjoyed hot coffee and plain bagels with cream cheese.

I’d listen to his stories for what seemed to be hours on end. It didn’t take me long to realize just how smart he was. Wired with a photographic memory and a passion for history, he was able to share life perspective from just about any corner of the world.  His stories would often start with an exact date, It was June 30th, 1972…It boggles my mind the way his mind would work. Although his brain was full of facts, his heart was built from solid gold.

Do You Need Anything?

His love came through every time we’d talk. I’d greet him with a big hug & kiss while his thick gray hair and big nose would press against my face. 🙂 He would always look me in the eye and ask me the same set of tender questions:

How are the kids?

Do you need anything?

All he wanted to do was help. He helped us every time he entered our house, often bringing fresh pita that Nana had cooked and chocolates for the kids. His love was as sincere as the moment he handed over his daughter to me at the altar. His ability to make you feel protected and cared for was proof that the image of God was being reflected from his spirit.

Days after his pancreatic cancer diagnosis we were able to book a family vacation at my cousins cottage. We spent as much time with the family as we could. On one of our last days, a wonderful neighbor offered to take us on a boat ride around the lake. Victor mustered up the energy to walk down the steep steps and the long dock into the pontoon boat. With the summer breeze blowing upon our faces, our smiles shined extra bright as we putzed along the lake soaking in every moment. 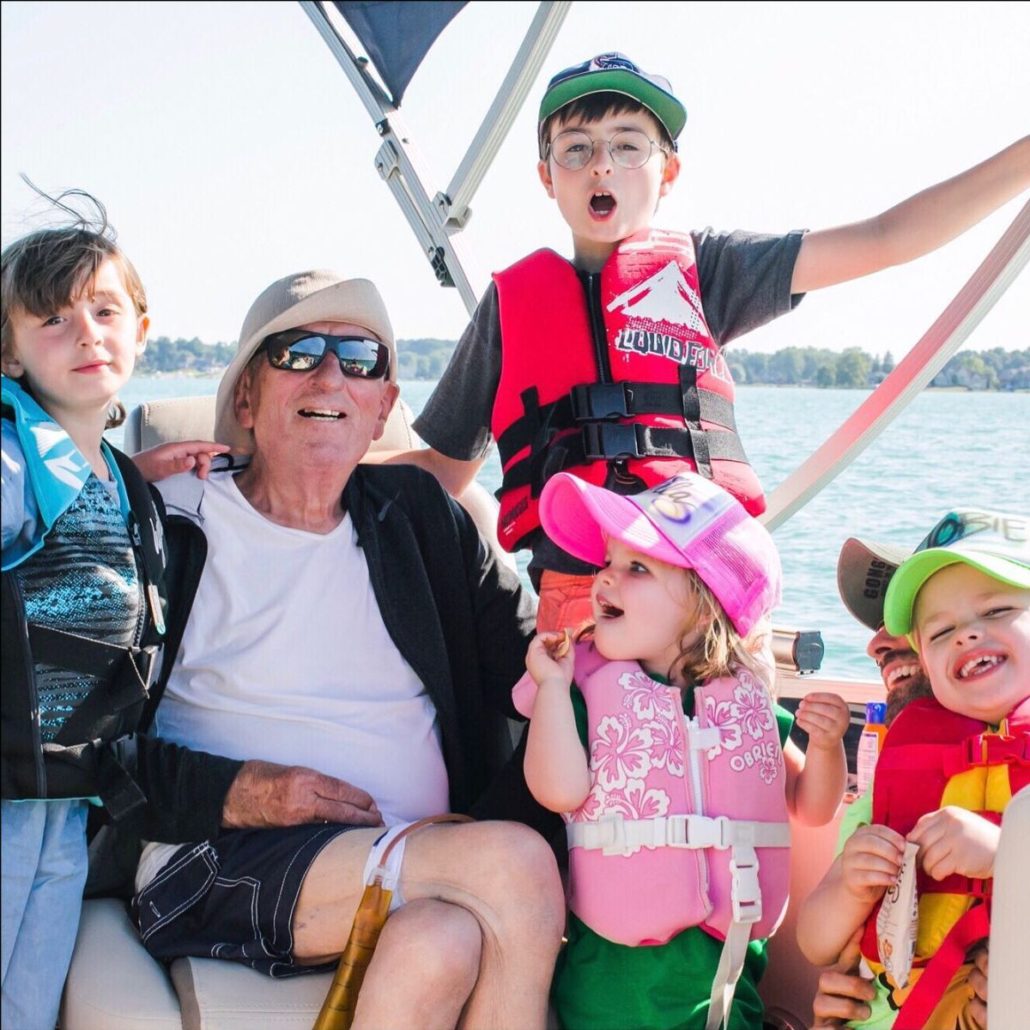 After a long month in the hospital, we were able to find a way to bring him home into hospice care for his final days. This was such a blessing as all he wanted was to be in his family room with the 40+ years of memories that existed within the walls that surrounded him. Even in his state of illness, he maintained such a positive attitude. His resilience and desire to focus on everyone else was evident. We even had the chance to gather around him and sing happy birthday to our son. Being at home with his kids and grandkids was the center of his universe. 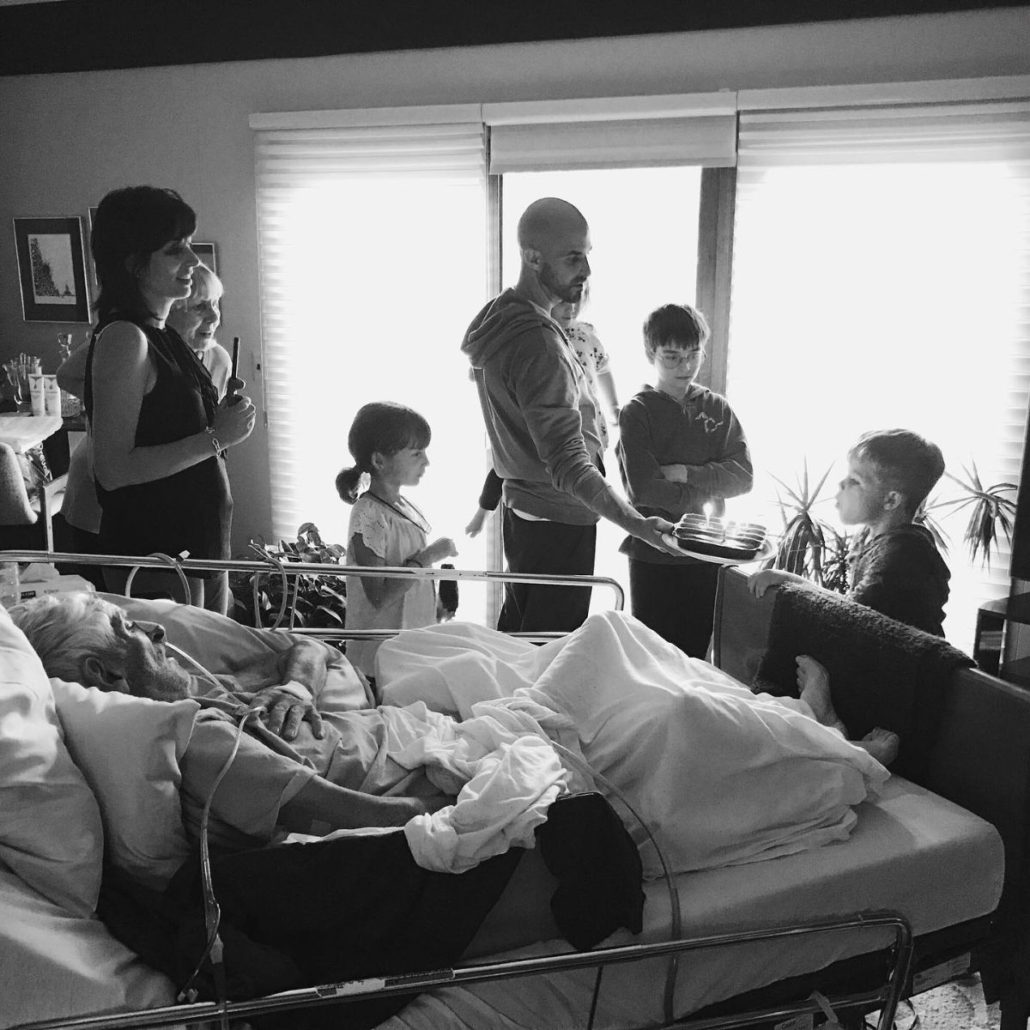 On the eve before he passed away, we had the chance to gather around his bedside to say our final goodbyes. His eyes were open, his body laid still, and he was unable to speak. His favorite Serbian music played in the background as we wept over him.

I held his hand tightly thanking him for all that he had giving us when all of a sudden, he lifted his hand up and held my face in the same manner he did with each of the grandchildren. As tears flowed out of my eyes and onto his hand, I knew that he was saying goodbye and reminding me one last time to, Kiss The Kids For Me.

“A father is neither an anchor to hold us back nor a sail to take us there, but a guiding light whose love shows us the way.”

Want to join the discussion?
Feel free to contribute!

I Do Wedding Vows Mark and Ksenija Ostach

Press On!
Scroll to top